This campaign was created by drawing inspiration from the vision of “One FSC”. Everyone associated with our system, from forest owner and forest worker to producer, NGO or consumer each play our own important role in FSC.

Snapshots from the lives and work of a variety of people, from forest owners in Finland to a hotel owner in Mexico, depicts our global community’s united effort to ensure forests for all forever. No matter where you get you wood or paper from, when the product is FSC-certified you are supporting our global mission.

When choosing FSC you’re supporting our strategic work in the world’s most vulnerable regions. And you contribute to making sustainable forestry a global priority. Because together we are FSC.

The “Together We Are FSC” campaign is meant as a structured way for anyone working within the field of corporate social responsibility (CSR) and FSC to better understand how FSC helps their business achieve the SDGs.

The campaign also helps anyone who is passionate about meaningful change understand why FSC is important on a global level and the impact of choosing FSC. This is relevant for all FSC-engaged NGO’s, organizations and businesses.

The campaign assets can easily be downloaded and implemented on social media platforms, webpages and CSR-reports.

FSC and the Sustainable Development Goals

The campaign and platform is linked to the sustainable development goals (SDG’s).

FSC addresses 14 of the 17 SDGs, covering ecological and social issues in forests around the globe. This makes FSC a solution for anyone who wants to do their part to achieve the SDGs.

Is this all because of FSC?

Aside from direct influence, such as those provided by third party FSC-audits, and concrete examples like FSC auditors urging the community to buy an ambulance, it can be difficult to distinguish what is solely a consequences of FSC certification, and what has come about as a result of influence of the forest owners, stakeholders (such as communities), FSC and the government. Often, it can be a strong combination of all these factors.

Often FSC certification plays the important control role through the yearly third party audit. In many cases FSC is the only organ to pro actively check up on social and ecological issues, even when rules apply. FSC is also a tool with a built-in security system because FSC can terminate the FSC-certificate if standards are not met at any time. 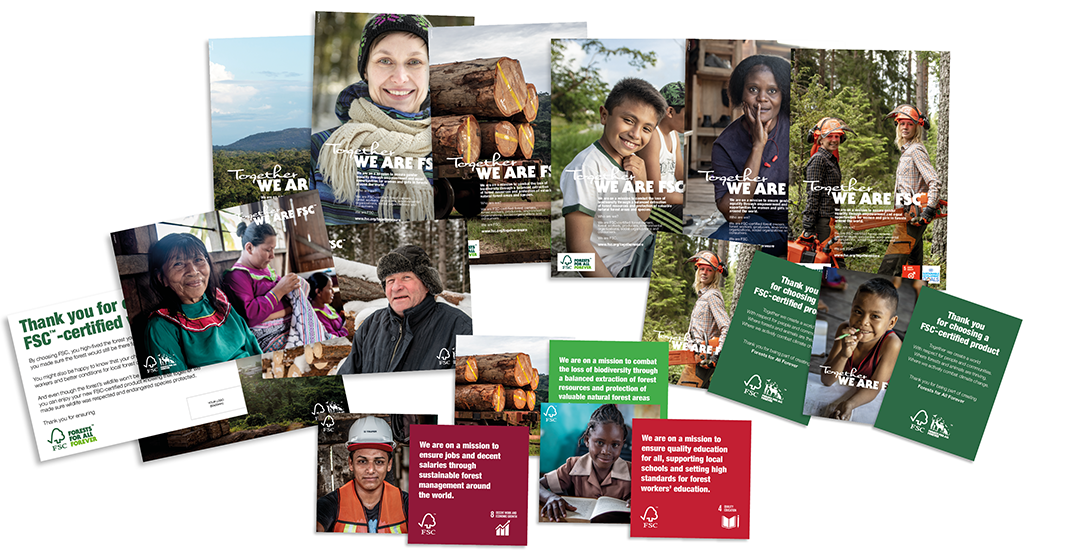 Share the campaign in any way that fits your purpose as a business or NGO. Help us spread the message by highlighting you engagement with FSC using the campaign assets.

This campaign was made possible with the support of: